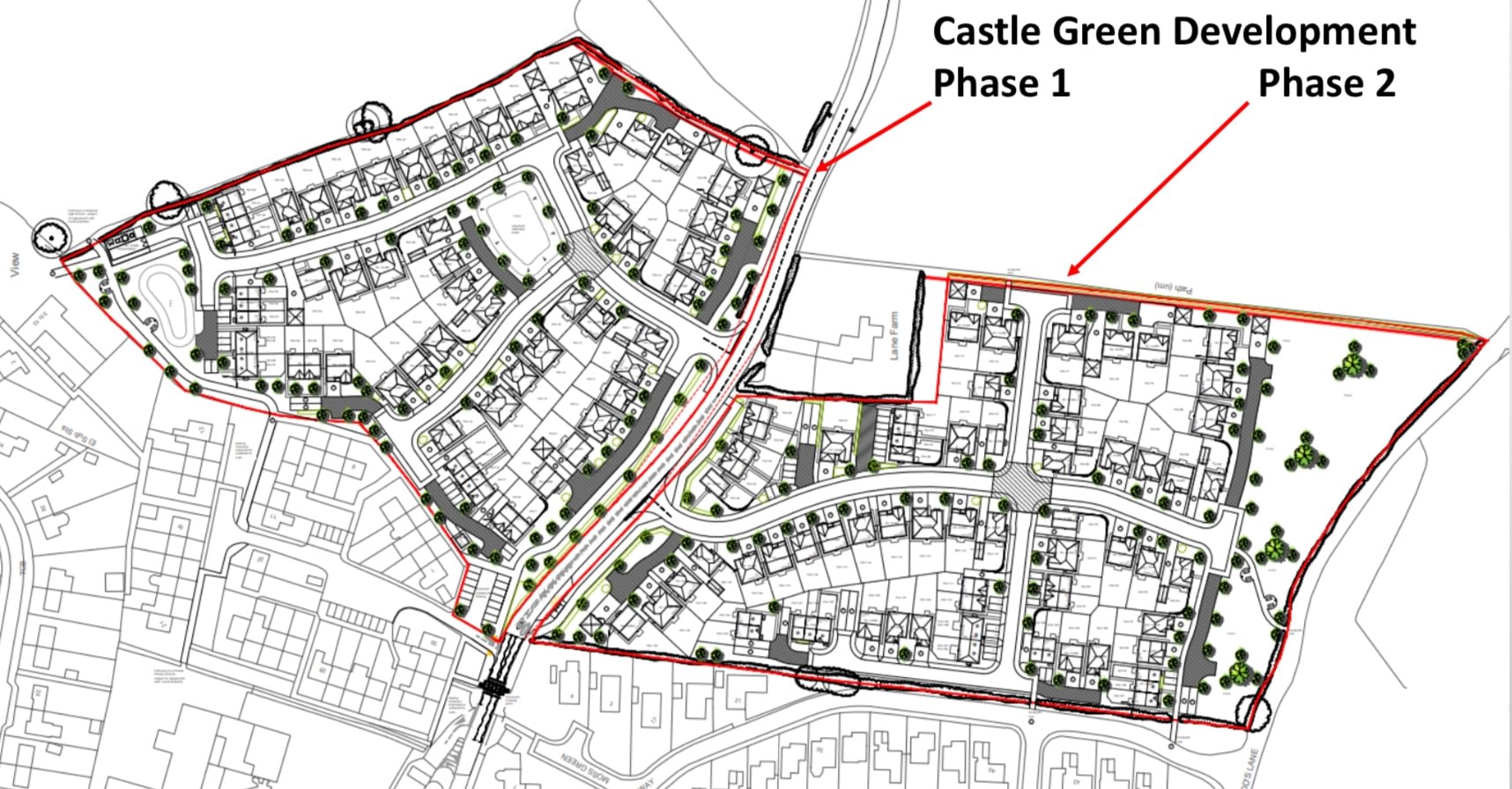 County Councillor Hugh Jones introduced the gathering about what has been going on and how John and Joan Filce had shouldered the financial burden so far and had been assisted by a number of others in Rossett, some of whom were present at the meeting.

John explained quite a few of the technical details of the development based on the Slides that Follow.

Joan outlined the present situation on some of the issues around land ownership and legal access on to adjacent estates north & south of Rossett Road.  Discussion ensued on what can be done legally to stop what is planned by the developer.

The route to the High Court has to be followed to stop the decision made to approve reserved matters on the 7th February 2022 by the Planning Committee when this was clearly a minority decision with 8 members being forced to abstain because they had not put up a counter proposal with grounds for refusal. We see this time and time again in Wrexham that when the Members want to go against the Officers recommendations the Officers do not assist the Members in formulating a counter proposal.

If you have not watched the Webcast of the meeting then we suggest that you do by following the link.

Joan explained the clock is now ticking if this route is to be followed. It was revealed in discussions that there are now 10 insurers that will not cover this area of Rossett.

If the village are serious about challenging the development, then the village must now be prepared to stand up and fund the next stage through the doors of the High Court and at least £30k will be needed initially possibly from crowd funding. If we win and our opponents are ordered to pay our costs the money will be refunded.

Joan and John will not fund these sort of court costs without substantial Village support. The further we go the higher the sum that will need to be crowd funded. Joan explained that the procedure to be followed is that a pre-action protocol letter ( i.e., a letter before action to Wrexham County Borough Council setting out our grounds and allowing a 14-day response period has to be submitted and they have already submitted a synopsis of the evidence to the Barrister and Planning Consultant to enable this to be drawn up.

It is hoped that this will be sent to the Council in this forth coming week. Once the Council’s response is received and we have considered their reply  the decision  has to be made as to whether to go through the doors of the High Court.

Joan indicated that the Judicial review is in two stages (1) An application on paper (no hearing) is considered by a judge who either grants or refuses permission to proceed (2) if permission is granted there will be a hearing (normally no more than a day) at which both sides are heard (legal representatives only, (no witnesses called) and the issue is decided.

The meeting of about 150 people voted unanimously to support and to contribute to crowd funding when asked.

As the decision Notice was notified to the Applicant and placed on the Planning Portal on the 11th February 2022 the application to the High Court has to be lodged with the Court before the 25th March 2022, and from that moment we are at risk of costs as costs follow the event.

We will be setting up a fighting fund following the meeting and we ask that you contribute what you can to the same so that we can oppose this appalling perverse decision.

Commentary on PowerPoint below:

A pdf file with higher resolution slides is available on request, see details via the Contact Us button at the bottom of the page or via our Rossett Focus Group Facebook page.