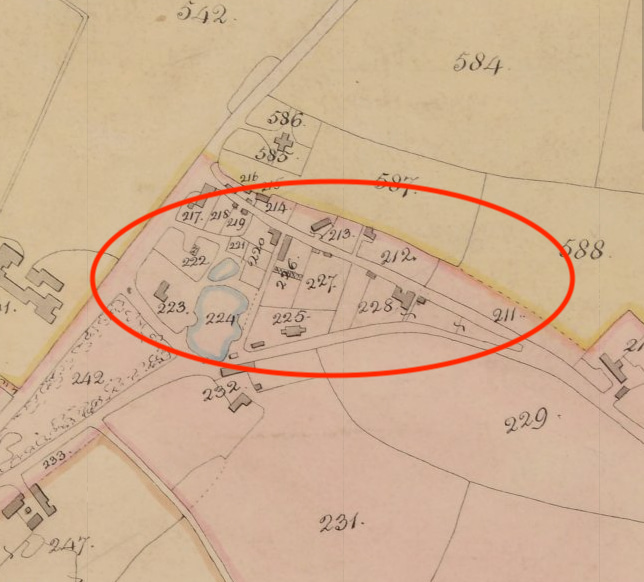 Nuisances were a different matter back in this era. Rossett Green though seemed to have more than its fair share in the Wrexham area.

In his book Reflections of a Bygone Age Raymond Lowe says by 1830 The Green had been totally enclosed by Chester Road, Chapel Lane, Holt Road and the short Lane above the children’s playing field. He goes on to say that at the lower part of the Green was a pond 60 yds by 55 yds.

Boards of Guardians were created by the Poor Law Amendment Act 1834, replacing the parish overseers of the poor established under the old poor law, following the recommendations of the Poor Law Commission.

Boards administered workhouses within a defined poor law union consisting of a group of parishes, either by order of the Poor Law Commission, or by the common consent of the parishes.

The first incarnation of the environmental health inspector was the Inspector of Nuisances, tasked with prowling poor neighbourhoods and stamping out insanitary habits.

From Mr E. Morris, relieving officer, Caergwrle:— On property belonging to Watkin Williams, of Shordley, and occupied by John Lewis, there is a foul and offensive privy, the matter therefrom penetrating through the wall into the house of the said John Lewis.

On property belonging to Henry Wilbraham, and others, occupied by John Youde, farmer, Caergwrle, the matter from the farm yard, and also from the dairy and kitchen overflows on to the township road for want of proper drainage, and is therefore very offensive and injurious to health.”

Rossett Green, Allington. John Liversage has re- moved his midden, and his place is quite clean.

Rossett Green, Allington. On the property of John Moore, farmer, Harding Moore, occupied by Thomas Taylor, shoemaker, Rossett, the muddy ditch complained of by me last week has been partially remedied, still there is a quantity of stagnant matter. The land- lord, Mr Moore, has been to inspect the premises and says the road surveyor ought to fill it up. I consider this is the worst nuisance in that neighbourhood, and may be altered at a little expense.

On the premises occupied by Thomas Thomas, blacksmith, Llay Smithy, there is a midden used by Thomas Thomas, Edward Jones, William Growford, John Finchett, Thomas Weatherby, and Robert Williams. This midden is within a short distance from these houses, and the liquid running on the side of the turnpike-road. W. Sisson, Llay Hall, rents these cottages. This will be removed.

In the High Lane, Llay. On the property of Elizabeth Tilston, occupied by Edward Kenrick, George Williams, and Ellis Williams have pig-sties built on the side of the highway. The liquid from these sties and the middens runs on the highway, which is very offensive to persons passing by. I am, gentlemen, your obedient servant, ED. LAWLEY, Inspector of Nuisances, Gresford.

From P.C. Lawley, Inspector of Nuisances for Gresford : ” I beg leave to report that some of the nuisances previously complained of are abated.

Rossett Green, Allington. On the property of John Jones, Neptune Inn, Saltney, occupied by Thomas Price, Samuel Carwright, James Liversage, and Thomas Gibson, three middens have been removed, and Mr Jones is having cesspools made so as to prevent filth being deposited on the highway and is also having a large hole where the manure was kept filled up.

Gun-street, Rossett, Allington. Mr Peters, of Brynyorkin, has drained his houses at the back, and has done some little at the pig-sties, but has not completed them yet.

Rossett Green, Allington. On the property of Ann Edwards, shopkeeper, Rossett, occupied by Elizabeth Gilham, Mary Gibson, and Robert Griffiths. The muddy surface drains complained of by me have been filled up with gravel, and two cesspools made, which is not complete yet. The middens are also removed and a cesspool made to contain the liquid from the pig-sties, which is not compete.

Rossett Green. William Taylor is filling up the ditch at the side of the highway, but is not quite completed.”