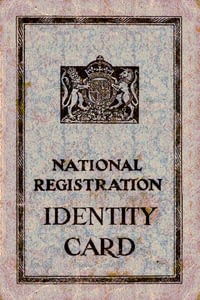 Following our recent post about the 75th anniversary of VE Day and Rossett War Memorial, it seems a good opportunity to list all the residents of the village back in 1939. Information relating to this period can be obtained on-line through a number of genealogy sites that have agreements with The National Archives (TNA). The data collection is known as the 1939 Register.

The 1939 Register provides a snapshot of the civilian population of England and Wales just after the outbreak of the Second World War. It was taken due to the onset of war with the purpose of producing National Identity Cards. The register later came to be multi-functional, first as an aid in the use of ration books and later helping officials record the movement of the civilian population over the following decades and from 1948. it was also used as the basis for the National Health Service Register. There was a legal requirement to carry an Identity Card right up to 1952. Name changes due to marriage etc. were recorded up until 1991 when paper based records were discontinued.

What is in the Records

Rossett, in common with everywhere else, had enumerators visiting each property in the village to collect the name, date of birth, address, marital status and occupation of every person in the household. Rossett represented just a fraction of the 41 million people to be processed. It is important to know that the 100-year rule applies to the records. Roughly a third of the people recorded have their records closed until their death has been verified. Many of the blacked-out (redacted) names would have been children, and many are still alive today.

You may be able to find the following information (where available):

Sometimes, you may see extra information on the right-hand side of the image, such as whether an individual had volunteered as an air raid warden. Some records include names crossed out with another name written in an annotation above or at the side, signifying the tracking of the population over time with the addition of women’s married names and other name changes over the years.

Browse and Search the Rossett Records …………..