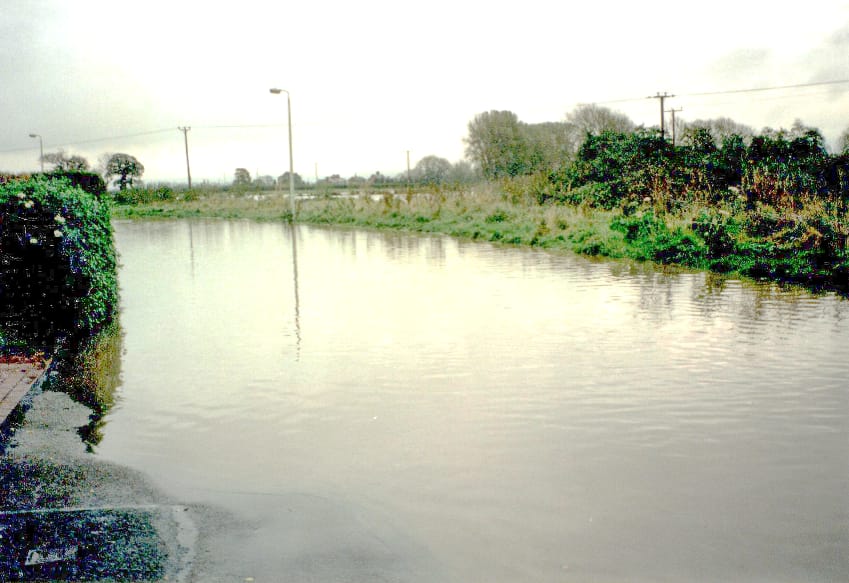 This article has been adapted from a narrative by a local resident of Rossett. It deals with the run up to the day of the flooding in Alyn Drive and the surrounding areas. The flooding is known to have peaked at a height of 15.79m Above Ordnance Datum (AOD) at 11:45pm on 6th Nov 2000. AOD is basically the height above sea level and is used to derive contour lines and spot heights on Ordnance Survey Maps.

The major flooding to the area started at the end of October 2000 with exceptional rainfall coupled with high levels of the Rivers Dee & Alyn. By the 31st October 2000 Almere Ferry was under water. The water levels at Almere remained high and by the morning of 6th November 2000 the River Alyn was still rising.

The water levels at Almere remained high and by the morning of 6th November 2000 the River Alyn was still rising.

Flood waters on the Almere side of Cooks Bridge constrained water in the Alyn upstream in the stretch Cooks Bridge to the B5445 Road Bridge. The water flowing down stream from Pont-y-Capel was unrelenting for several days and the following slide is typical of the weir flows during the period 31st October to 6th Nov 2000.

Photo: Burton Road Weir on the Morning of 6th Nov 2000

The photographs that follow illustrate the worsening position in Alyn Drive, Gun Street in the east and Manor Lane and Trevalyn Hall in the west.

Note: In the British Isles, an ordnance datum or OD is a vertical datum used by an ordnance survey as the basis for deriving altitudes on maps

Mid Morning of the 6th

The Red Star indicates the location of the flood height measurement.
Kerb OD 14.10

By early afternoon the waters were still rising in Alyn Drive.

The following photograph is taken from the same location in Alyn Drive but the water has risen further – Note the footway repairs in the bottom left hand corner.

The following photographs illustrate the worsening position during the afternoon on land at Alyn Drive.

The photo below shows the sandbags that the council planners denied being used!
(At a hearing in 2002)

Photo: Sandbags being delivered to residents in Alyn Drive.

The following photograph was taken at  about 2.30pm on the 6th November 2000. It shows the fence at No 37 Alyn Drive fronting the river.

The next slide shows the normal view of the fence in the last slide as seen from the opposite bank of the river.

Note the height of the fencing rail from the top of the concrete river wall.

The next photograph shows the bungalow at 37 Alyn Drive

Note the flood line (blue star) on the tree in the garden and the level of the River Alyn in the background.
Datum OD 15.79

The above narrative was written in 2002 by a Rossett resident who was was in the process of purchasing the property they now live during the 1976 (25th & 26th September) floods. This was intended to be used as a presentation at the Wrexham UDP Public Inquiry of 2002. Castlemead Homes had applied to build houses on land between Alyn Drive and the River Alyn, the proposal was supported by Wrexham Planning Dept and the Environment Agency. However, the Planning Inspector on this occasion took a more precautionary view.

Below is an extract from one of the 2019 Planning Appeal objection Appendices submitted to the Planning Inspector by the Rossett Focus Group.

In a follow-up article we will examine what effects a flood of a similar magnitude to 1975 and 2000 would have on the sites and surrounding properties designated for development by the Wrexham Planners.

In July 2002 a substantial area of Rossett was subject to UDP review by the Planning Inspector. This section seeks to rectify and clarify the misleading information presented at the Wrexham UDP Examination in Public held in 2002 by The Environment Agency (now Natural Resources Wales i.e. NRW) and Wrexham Council Planning Representative. These two organisations supported limited building of 15 dwellings in the now confirmed Flood Plain.

Flooding issues were examined in great detail and it was concluded by the Inspector that the River Alyn had reached a height of 15.51m AOD. He was persuaded by the Environmental Agency and WCBC that the height 15.79m AOD claimed by the residents of the village could not be substantiated, because no photographic evidence was available at peak flood time of 11-45pm on the night of 6th November 2000.

He concluded in Paragraph 6.421 that
“if the backing up or ponding argument holds good then it would have resulted in most of the existing houses fronting Alyn Drive being flooded. None of the houses was flooded, on the evidence presented. Also there is no photographic evidence to show the River Alyn ceased flowing. Neither is there any photographic evidence to show that Alyn Drive west of its western junction with Grosvenor Crescent was subject to flooding.“

Paragraph 6.422
“There is no doubt that flood water entered the rear garden of 37 Alyn Drive. Taking the EA floodplain line where it crosses the southern boundary of the property, it is likely that water levels rose above OD 15.51 in the rear garden. This is an unsatisfactory situation. In the draft site layout for the objection land, the limited plot depth of parts of the site show dwellings with very restricted curtilage depth to the front and rear. The concern and stress faced by residents of these new properties if the flood levels of November 2000 were to be repeated is, to my mind, a valid planning consideration. Three properties on the eastern arm of the site would be enveloped by the floodplain boundary on three sides. I note that floor levels of new dwellings would be raised by 600mm above existing ground levels and that sustainable drainage systems would be put in place but this does not eliminate the perceived fear of flooding of residents, particularly where properties are also close to the River Alyn itself.”

At Paragraph 6.425 he continues
“In terms of flooding, the Environment Agency is the key body that advises the Council on this issue; they have identified the limit of the floodplain and have agree that a limited area of 0.76ha can be developed for housing. If there were strong reasons based on a specific need for housing land in Rossett, I would accept the allocation of this land for housing within the confines set by the Environmental Agency. As there is no specific need, I take the approach that the land use planning system should seek to minimise environmental risks over the lifetime of new development particularly in light of climate change scenarios. Flooding as a hazard which may not directly threaten human life and cause damage to property, can still be perceived as a concern where the flood risk line is within a few metres of housing. I invoke the precautionary principle in respect of any development on the objection land. ……….”

The Inspector reached these conclusions on the basis of the evidence given by WCBC who denied that sandbags had ever been issued by the Council, and that the Environmental Agency (EA) had approved hydraulic modelling for the location. Detailed examination of the modelling shows it was clearly based on wrong flood lines, and that that (EA) had denied opening flood defences higher up the River Alyn that had caused severe flooding and damage from Mold to Trevalyn.

The Inspector accepted the WCBC and EA evidence in preference to that of the local residents. It was nearly four years after the flooding that EA finally admitted that they had opened flood defences to prevent flooding higher up the River Alyn. This massive release of Flood water from Bala Reservoir had added to the problems of flooding in Rossett and the Dee Valley.

It has now been proven that WCBC did issue sandbags to residents in Alyn Drive and surrounding areas plus properties in Trevalyn Way and Moss Green, and that the River Alyn did rise to 15.79m AOD as claimed by the local residents. The reason that none of the houses was flooded was that sandbags had been deployed from early afternoon by WCBC Highways Staff from Gwersyllt Depot, and this has been confirmed by the WCBC Duty Flood Officer.

The dismissive approach to flooding in Rossett is still being followed by NRW and WCBC in spite of extensive flooding and reporting carried out by local residents. The flooding reported to the UDP Inquiry in 2002 not only affected residents in the Alyn Drive area which was the focus of the Inspector at that time but also affected Trevalyn Way and Moss Green that went unreported at that time. The continuing dismissive approach being followed by WCBC Local Planning Authority is illustrated by the comments made in an email communication between the Wrexham CBC P/2018/0560 Case Officer and NRW on the 2nd January 2019.

The Alyn Drive site that was referred to above was surprisingly included as a candidate site in the current LDP as Site Reference RO004CS. It should be noted that this site falls totally within the River Alyn Floodplain, and is shown on the latest Development Advice Maps as totally flooded confirming belatedly the evidence presented by local residents to the 2002 WCBC UDP.

Finally we leave you with a map extracted from the original documentation submitted by the Bellis agent regarding the topography of the fields north and south of Lane Farm (plus some annotation by the RFG). We leave you to draw your own conclusions…………. for now!