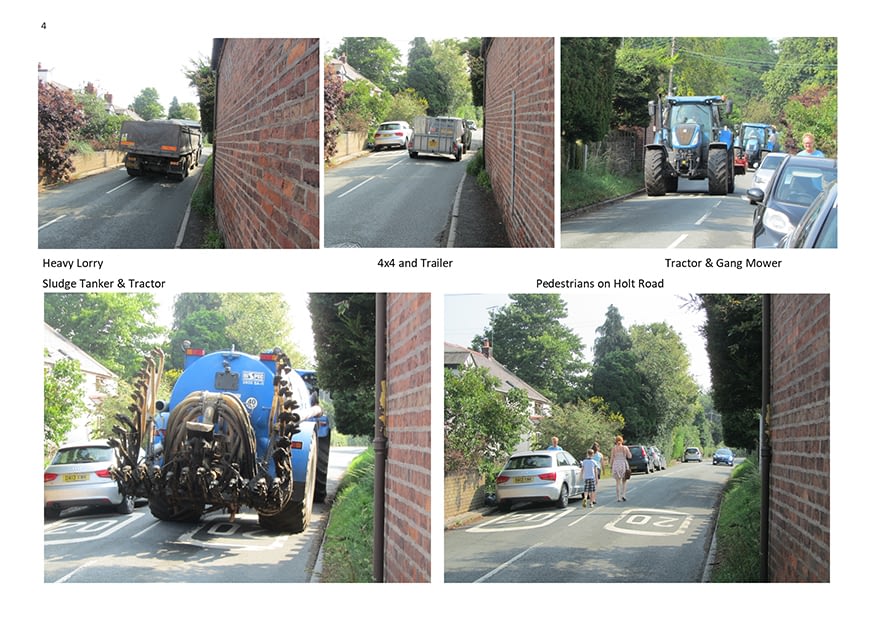 Despite warnings from the Equalities Commission Wrexham County Borough Council are about to give the green light for Castle Green Homes to construct a defective pedestrian footway “upgrade” on the B5102 Holt Road between Green Farm and Trevalyn Hall View by way of Discharge of Conditions that have been set down by the Welsh Minister to achieve safe access on this roadway when the design proposals cannot meet mandatory standards.

A Road Safety Audit commissioned by Agents of the developer Castle Green Homes and carried out by Go-Surveys Ltd on 21 May 2021 confirms what residents have been pointing out to the Council Planning Officer, Council Chief Planning Officer and Council CEO for the past 3 years. The road safety issue was also discussed at the emerging LDP hearings with Welsh Government Inspectors when these Resident’s Concerns were debated.

The Auditors report found a number of problems:

The Developers Designer commented on the report findings “….noted. However, this has been discussed at length during the planning stage of the development and it was agreed with Wrexham…”. He also commented “… noted, however, as above this arrangement was considered at length during the planning stage and is considered an upgrade to the current arrangement.”

The public should note that this proposal was refused by the Members of the WCBC Planning Committee. This footway scheme was submitted to the Planning Appeal in a joint action by Officers and the Developers Agents and has never been consulted upon or agreed by Members of the Planning Committee or by the Rossett Community. The Rossett Community Council have already objected to this proposal but it seems that they are being ignored.

The Rossett Focus Group have discovered that this “upgrade” of the pedestrian footway along the south side of Holt Road will result in a footway that is much too narrow and fails to comply with several mandatory standards on footway construction:

This footway proposal dis-advantages persons with protected characteristics and with those having limited mobility and has been referred to the Equality Commission for evaluation. They have subsequently written to WCBC to advise them that creating this footway will potentially place WCBC at risk of failing to comply with its Duty of Care under the Equality Act 2010. Under such circumstances prosecution of the Council would be most likely either by the Equality Commission or by private action should this footway be altered in a way that does not meet the Mandatory Conditions of PPW11 and the Manual for Streets.

It should be noted that the Appeal Inspector or the WG Minister cannot instruct WCBC to ignore the Equalities Act 2010 or break the Law. The advice given by an aide to the Welsh Minister following a recent information request requires the Mandatory Standards to be followed for such situations. The photographs below illustrate the parlous traffic conditions on Holt Road Rossett.